Final nail in the coffin

In a final blow to Myriad, who had won in two lower courts in Australia upholding its patents there, the High Court just ruled that their patents are invalid, citing reasoning echoing the US Supreme Court and that I argued in my book Who Owns You. The rest is now history. Reason once again prevails in one small area of patent law.
Posted by David at 3:02 PM No comments:

Foreword and Preface, for free!

Thanks to Wiley (my publisher) and PatentDocs (the very popular and excellent website on patents) you can read the Foreword (by Dr. Kevin Noonan) and the Preface (by myself) online.

In other news, today the book hit #1 in the Patents, Trademarks, and Copyright New Releases section of Amazon!
Posted by David at 7:26 PM No comments:

What's New in the Second Edition?

Addressing some criticisms from reviews for the first edition, I have corrected technical errors throughout. Moreover, I have added a significant amount of material in the wake of the Myriad decision. A full new chapter discusses the decision itself and its reasoning. An expanded version of the "Science" chapter, now co-authored with Vanessa Gonzalez, PhD, a pharmacogenomics expert, includes illustrations and some new material as the science has advanced. I have added a chapter describing a complete ontology of invention and discovery that coalesces the reasoning behind my arguments into guidance for future issues where the distinctions between the two are likely to be called into question and pose issues for patent law, science, and innovation. As well, Kevin Noonan (a critic of my arguments) wrote a lengthy and informative foreword in which he offers the utilitarian arguments in favor of gene patents.

The work now should stand as a more complete record of my arguments, the legal status of gene patents, and an epoch of sorts that has come to a close, even as some questions linger, and new ones loom for future consideration.

I hope you enjoy it.

Who Owns You, 2d Edition

The 2d Edition is already available as a Kindle download, and the hardcopies will be in stores and available for order in a few weeks, depending on your location.

The issue of gene patenting is not settled worldwide, and our interpretation of the changing law will impact our approach to new and emerging technologies in biology and beyond. I hope you'll consider carefully my arguments, my attempt to devise a coherent ontological scheme to innovation vs. discovery that can avoid some of the pitfalls of the past, as well as my attempt to describe and reason through the Supreme Court's rulings in the area of gene patents and related cases. Here is the link to the book on Amazon. 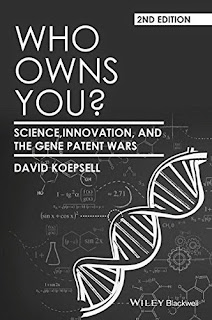 There's a JD/PhD working at University of Chicago Law School named Brian Leiter. He specializes in philosophy of law and Nietzsche, and for a while was a sort of gatekeeper for the Philosophy field due to his ratings of philosophy departments. While his importance in that role has recently declined, he also has a long history of internet belligerence and public dustups. He may be why you are  here visiting my blog since he has lately focused some of his anger on me and has twice mentioned my name in the last few months. I won't bother trying to psychoanalyze his obsessions, nor to document his issues and disagreements (all of which can be gleaned from some of the links in this post, and by a casual search of the web) but simply take this opportunity to thank you Brian Leiter, for helping to bring some notice to my web pages and work in philosophy -- again, especially now that the 2d Edition of Who Owns You is available on Amazon, iTunes, and soon in bookstores near you.

I've noticed a fair amount of increased interest in my personal web page and this blog (probably by people looking to confirm an un-cited-to claim about my stand on an issue relevant to a professor in philosophy - a stand I never took, as I merely tried to correct some misperceptions about the nature of tenure given I worked in that area of the law when I was employed in the NY Attorney General's office). Doubtless those who searched out my statements on that case are puzzled as to why Leiter would mention me by name - I did muse on his own stand on the case. I have no answer for that other than the guy seems obsessed and consumed by vendettas. He has been proven wrong in his judgment about my foresight and abilities of analysis of the justice of gene patents, I was more or less vindicated by a sweeping change in the law, and the rest is history. The Second Edition documents the arguments I made, their applicability to the current legal scheme, and the errors of those who for so long supported a practice which I am glad to see stopped in the USA.

In the new edition, which includes a foreword by Kevin Noonan of http://www.patentdocs.org (who is a friendly and an honest critic of my arguments even now), I elaborate on the Myriad case, which began after the first edition was published, and offered an exciting opportunity to track the relevance of public philosophical debate. The case surprised many in the patent bar, but anyone who pays attention to the logical arguments about the nature of "isolated" genes vs. those that are part of the genome would not be surprised. The unanimous Supreme Court decision was entirely logical, the legal landscape has been made more logical and predictable, and in this edition I added some materials proposing a general ontology of discovery and invention that helps to make sense of the new state of the law for applicability in the future.

I'll have a lot more to say in the near future on patent reform in general which I think is at a critical crossroads, but in the meantime, and once again, thank you Brian Leiter, for keeping my name in the blogosphere, and helping to draw attention to my work. Keep it up and I may feel obliged to give you a cut of the royalties.
Posted by David at 1:52 PM No comments:

The book is in press now, due out in May. Expanded with discussion of the Myriad case which pretty much established what I argued for as the law of the land, as well as including a foreword by Kevin Noonan of Patentdocs, the blog that once attacked the book, this edition is intended to be a definitive edition. 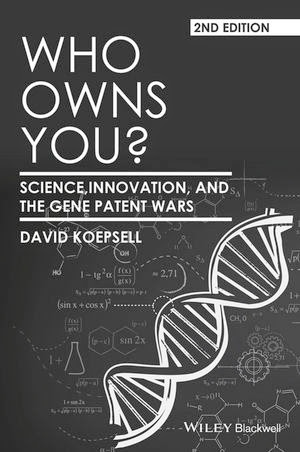 Many thanks to all who contributed.

Last year, following their loss in the Supreme Court, Myriad sought to block competition in a last ditch effort by suing Ambry and others who would offer BRCA testing. They lost a motion for a preliminary injunction, which would have prevented their competitors from offering tests while the suit was pending, then they appealed that to the CAFC, who today rejected their claims on appeal. This fight is done.

Echoing reasoning I have advocated, the court held:


Myriad has lost all the way, and the BRCA genes and technologies and methods associated with their detection are where they belong: in the commons.

UPDATE: it's particularly good timing as the second edition of Who Owns You is in production and due out in May, including a section about the Myriad case which started after my book was first published. For a recent presentation regarding my theory of the commons and how it relates to the current status of the case law, you might want to scroll through this.
Posted by David at 5:14 PM 1 comment: